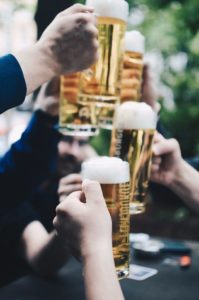 Alcohol attracts a lot of attention, especially at this time of year. In Australia, we are known for binge drinking. European’s sip on it before a meal, and it is banned in the Middle East.

In China, it has been used socially and medicinally for thousands of years. In fact, alcohol was first brewed in northern China in as early as 7,000 to 6,650 BCE.

There are a number of short term effects including:

Alcohol can have a long term effects on your liver and brain. It can also increase your risk of cancer.

In Chinese Medicine, when alcohol is used with care, it can be medicinal. It is known for vitalising the spleen, liver, stomach, and small intestine, expelling pathogenic wind and cold, and promoting circulation of the blood and qi. Alcohol is pure yang in nature, therefore is very heating and quickly penetrates to all areas of the body.

Like all substances, a wrong dose can lead to poisoning. According to Chinese Medicine, too much alcohol results in excess heat that can then harm the aforementioned organs that would benefit from the smaller dose.

One of my favourite herbs, Goji berries (Gou Qi Zi), can be soaked in whiskey or vodka. This herb is used for strengthening the liver and kidneys. When soaked in alcohol, this is known as medicated wine, and can be taken in small quantities after meals.

From a Chinese Medicine point of view, there are rules about the right way to drink alcohol. Here are my top 3 rules:

The alcohol is instantly absorbed through the lining of the stomach into the blood stream, and being pure yang, it disperses rapidly throughout the body and opens the pores of the skin. Yin qi is burned up by the powerful internal heating effect, as well as leaking out through the skin. As a result, the body rapidly becomes yin deficient. Sleep is affected, with insomnia, disturbed dreams, and night sweats characteristic of yin deficiency, so that the baby yang cannot be nourished and the next day starts deleted of yang. When good quality alcohol is sipped slowly during a relaxed meal. Digestion is encouraged, the circulation of the blood and qi is improved, and the internal organs are vitalised.

Getting drunk is dangerous, for as well as causing yin and yang deficiency, at this level, the alcohol is acting as a neurotoxin. If you have over consumed, have a strong cup of good quality green tea. Green tea works by cleansing the body of accumulated excess heat. Several cups will usually overcome the symptoms of intoxication within an hour and may help protect against hangover.

Get the latest news & blog posts